The dresser moulding and how I did it...

Attaching the moulding to the top of the dresser was something I've been looking forward to doing since I started. I knew that because of seasonal movement I would need to use a method other than just glueing all the pieces around the front and sides.
The first method I learned was to glue the front few inches and then brad-nail the rest. Norm Abrams did this a lot in the New Yankee Workshop.  I probably would have been fine with this until I read an article by Christian Becksvoort from Fine Woodworking's Woodworking Techniques. This looked like a very strong but elegant way to attach moulding to the side of my dresser. It also looked like it would be quite a challenge for me to accomplish.
After finishing the moulding I felt that it was a little easier than I had predicted. Maybe I got lucky. I did take pictures of how I did it so I can share it with whoever is interested.

First, I figured it would help to make sure the sides were pretty flat and square. I did as well as I could with my low angle jack, checking with my try square often. 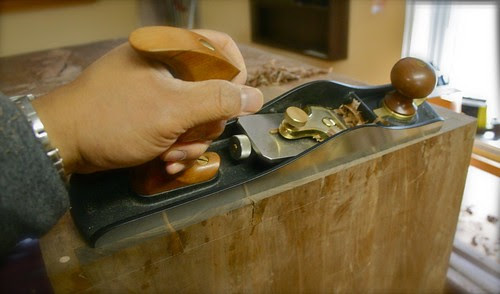 The front moulding was cake. Cut the miters and glue it to the front. 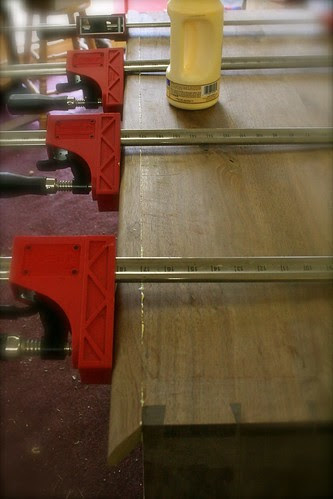 This was the difficult part. I cut a groove in the moulding with the table saw in two passes. It ended up being about 1/4" wide and 3/8" deep. I did the rest with a dovetail bit in the router table. To make the key I cut a piece of scrap the same width of the widest part of the dovetail. I don't work with calipers so I just got it as close as I could. Just make sure it's not too skinny. I ran that piece through the router table with the dovetail bit set at the same height on each side a little at a time until I could get a snug fit inside the length of moulding. I rubbed-on some paraffin wax to make it easier to slide on. While it was inside the moulding, I planed it flush with a block plane to make sure it wasn't too thick which would result in a gap between the moulding and the case side. 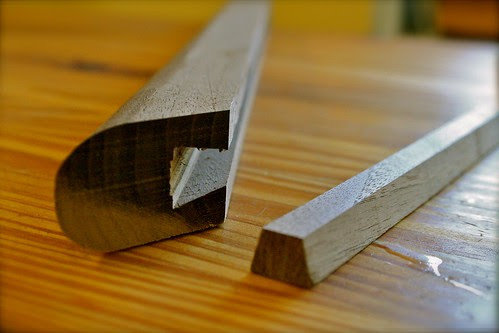 I cut the miter on the side moulding, checked the fit and adjusted it with my jack plane and shooting board.  I slid the dovetail key inside and placed the assembly flush with the case top and held it there with a clamp, leaving enough of the key sticking out to secure to the case. 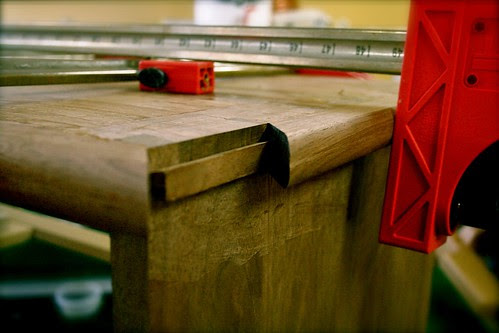 Becksvoort uses wood screws to attach the keys to the case. I used cut nails because I've been wanting to use them for a while now and I just didn't have the right screws. Cut nails have amazing holding power and so I thought they should work just fine. Two important things to keep in mind when using cut nails are to predrill and orient the nail so that the flat of the nail runs parallel to the grain of the wood. Skipping either and you risk
splitting your work. 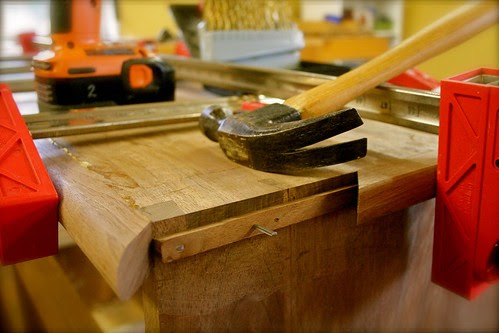 After nailing each section I released the clamp and slid the moulding back and made sure it was flush with the top again. I did this until I had the entire key attached to the case. 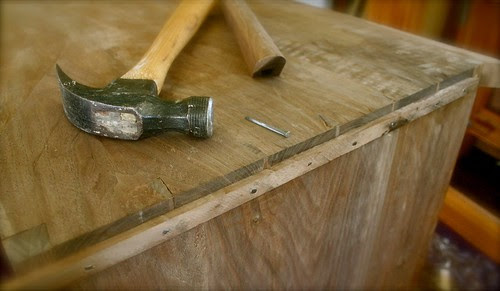 I used a pull saw to divide the key into sections. These should float underneath the moulding as the case moves with changes in humidity. In hindsight, I should have placed the nails a bit closer in each section to allow more movement but time will tell. 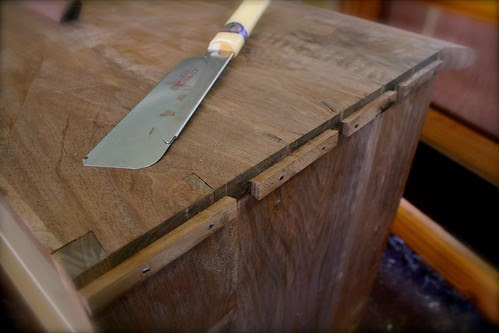 With a tight fit (thankfully) I tapped the moulding on with a mallet. 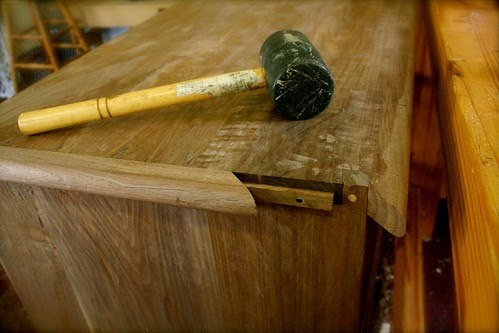 I stopped a few inches short to apply glue to the miter and case side. Carefully, I drove it home, tapping just enough to close the miter and squeeze out glue. Tapping too much would separate the moulding from the front of the case. 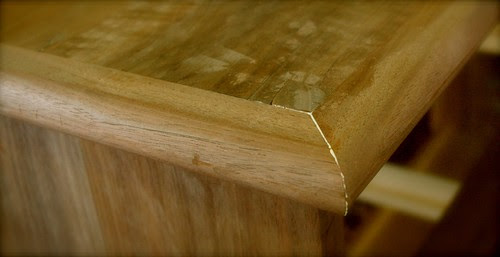 Construction of the case is now complete. Now I can concentrate on finding walnut boards for the drawer fronts, deciding what to use for the drawer sides and bottoms, and how to put it all together. Right now I'm pretty set on traditional construction: solid wood panel bottoms and half-blind dovetailed drawer fronts. Hopefully, I can have progress to post on in the coming weeks. 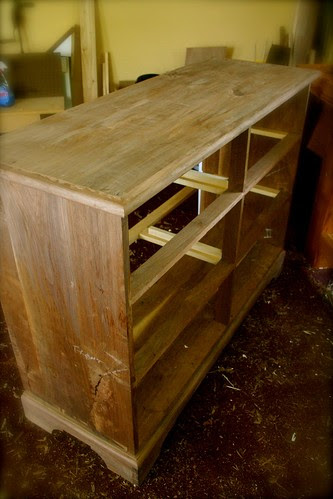 More work on the dresser...

Yes, it's the same walnut dresser I started over a year and a half ago. Over the last month I've finished the base and the moulding around the top. I'm not sure where time goes but it definitely doesn't stop.
The base of the dresser was made by dovetailing the front to the two sides. I attached a 2" top to the base mitered at the corners for the carcass to sit on. 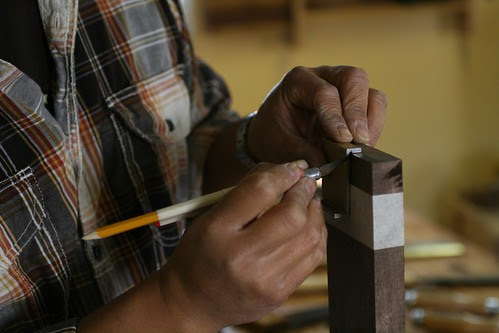 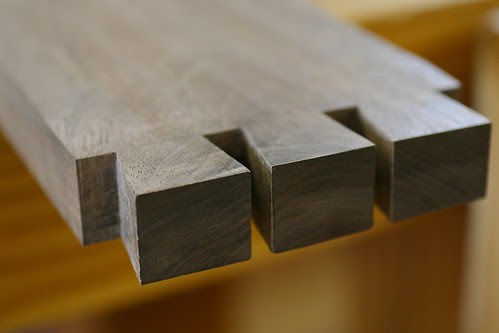 After I assembled the base, cut the curves to form the feet. I cut and formed the front with hand tools. I used a coping saw to cut the curves and my Japanese rip saw for the straight section in between. 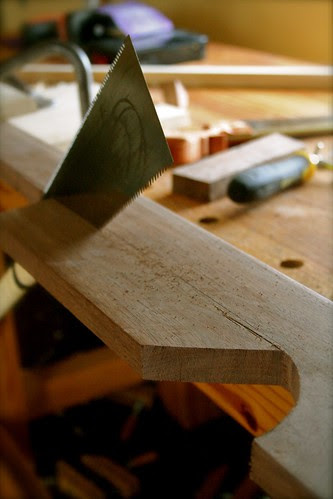 Of course this leaves a rather rough surface to smooth-out and bring to the line. 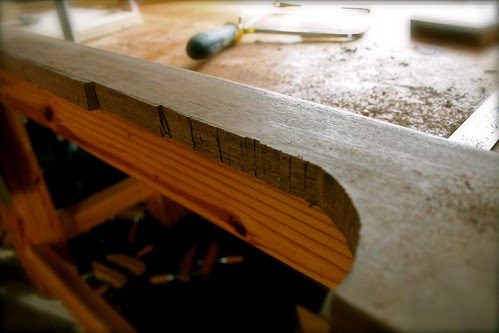 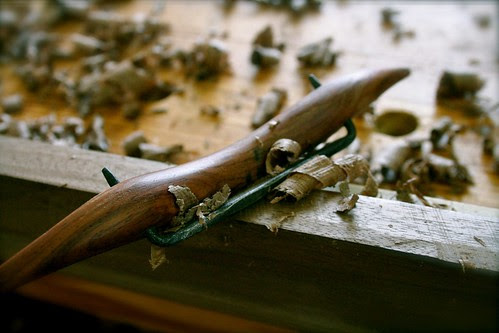 This is all good practice and it was nice to use my Muji' contour plane but since I needed to speed things along I went to the barn and fetched my electric jigsaw. I almost forgot how much I love this thing. It cuts crazy good, stays on the line and the Bosch finish blades leave a nice finished surface. 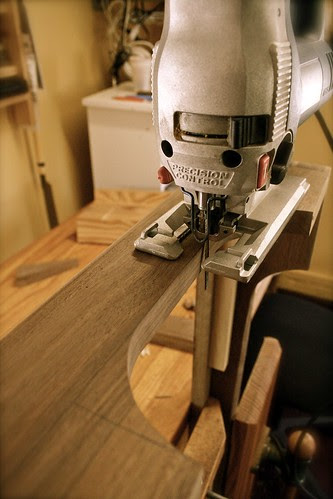 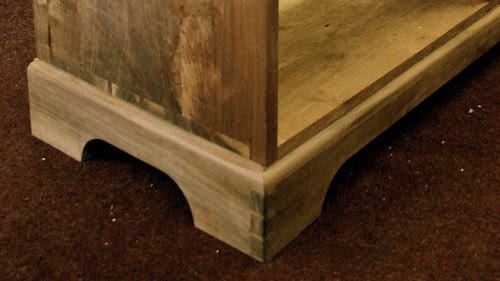 I had originally planned on keeping this simple curve for the design of the base but I saw a dresser somewhere that had an extra detail I wanted to include in mine. 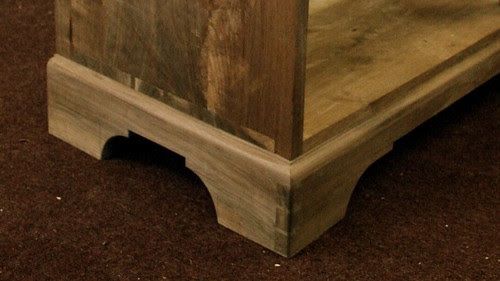 It's a subtle detail but I think it gives it a more refined look.
The next part of the dresser to tackle is moulding for the top. Attaching the moulding to the front is cake but since the carcass is solid wood I can't do the same for the sides. Since solid wood expands and contracts primarily perpendicular to the direction of the grain, glueing another piece over a few inches across its grain can restrict this movement to the point that it would eventually crack. I've been studying a method for attaching side moulding used by Christian Becksvoort. It works great I'm sure, but it looks difficult to pull-off. I could also attach it by glueing the front few inches and use brad nails, which supposedly bend with seasonal movement, for the rest of the length but that would both be too easy and too fast... the absolute opposite of this project.
-RM
at 7:46 AM No comments:

"Back" in the Cottage 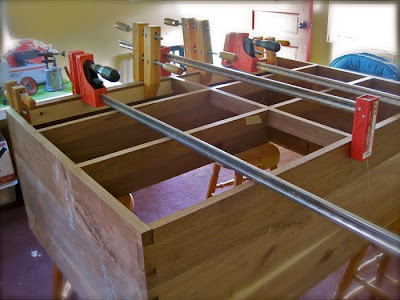 It's been a busy summer this year and I haven't had much time to devote to woodworking. But I can't say that I'm really sorry about that. We've had a summer full of vacations, concerts, cookouts and just great times with my family. On a personal note, I've been working really hard to improve my physical fitness this year; I've dropped almost twenty pounds since January. Shawn and I ran our first half-marathon in seven years, I finished the Insanity workout program, I started mountain biking again after ten years and completed my very first Sprint Triathlon for my 38th birthday last Sunday on August 1st. I feel great.
During this time, however, the six-drawer dresser lay here in the cottage patiently awaiting attention. After reacquainting myself with the game plan and remembering which parts go where I took a deep breath and glued up the drawer supports and dividers. Not too bad.
Next up was the back. I decided to make a frame and panel back as opposed to shiplapped mostly because I thought it might be a bit quicker and would save a bit on the weight. The joinery for the back panel was just simple stub tenons into grooves cut for the panels. 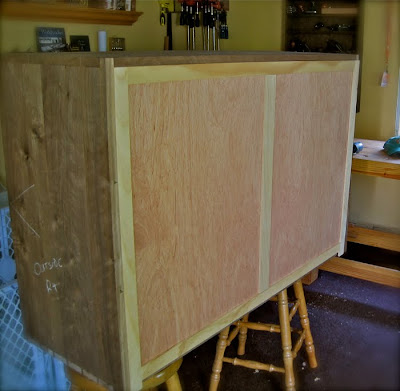 So now I've got what's looking more and more like a dresser. In the coming weeks I will be working on the base, the moulding, six dressers and some type of finish. I'm really looking forward to the moulding because I want to use a method discussed by Christian Becksvoort. It looks challenging so I hope I can pull it off.
-RM
at 9:26 AM 2 comments: 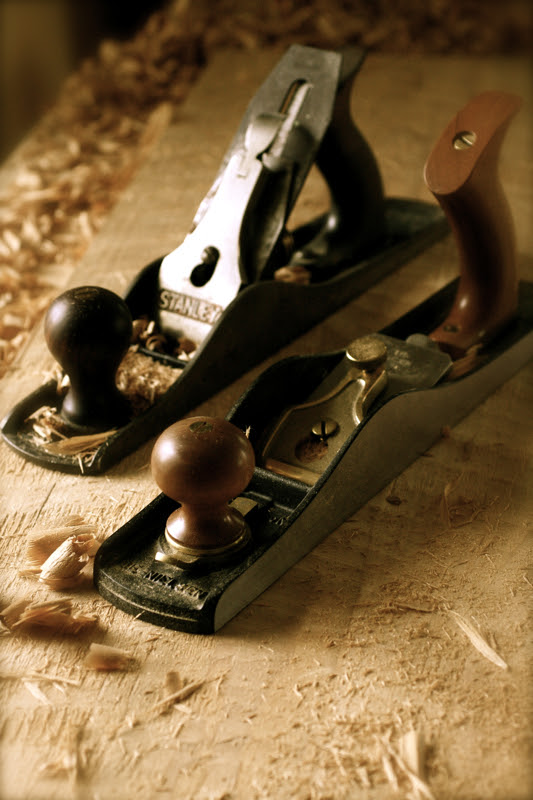 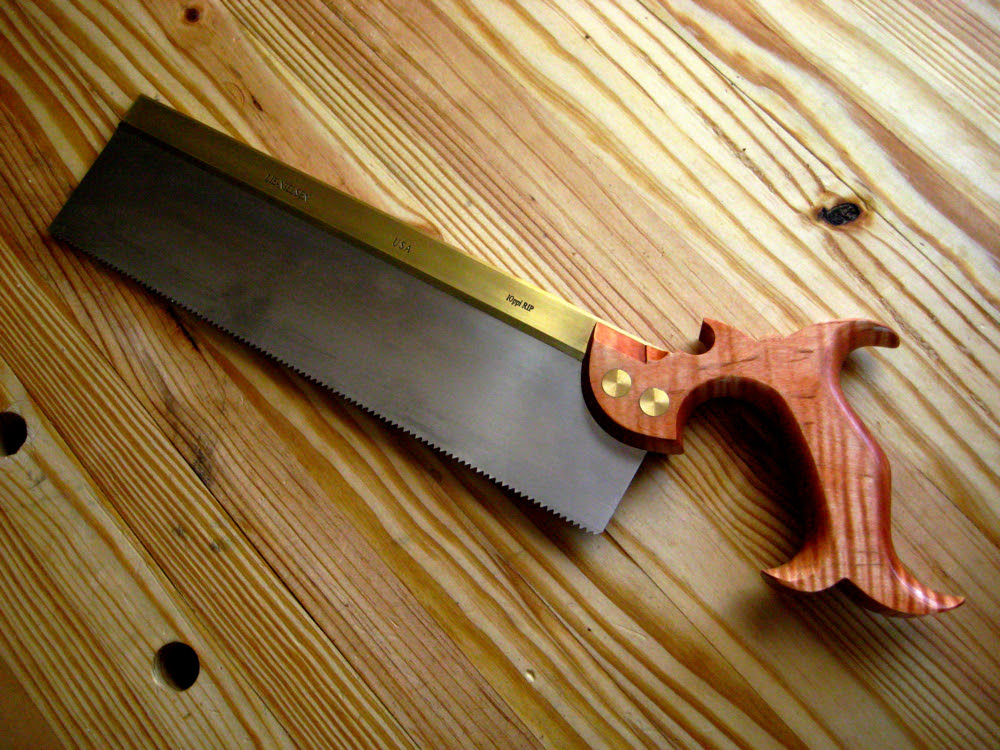 Some of my favorites... 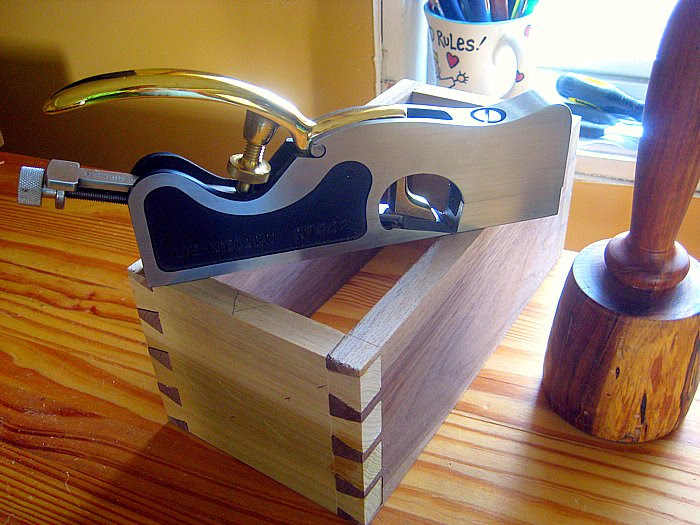